What is prayer? The simplest definition of prayer is that it is a communication with God. It’s talking to the Lord. This can be adoration, confession, thanksgiving, supplication, asking questions, conversing, and a host of other types of communication. As such, I’ll confess that I have always found the Catholic practice of “praying to Mary” to be a bit strange. Why talk to the mother of someone if that person is in the room?

Why Is Mary So Important to the Catholic Church?

Blessed Mother, Mother of God, Our Lady, Queen of Heaven, Cause of our Joy, Mother of Mercy. That is but a small sampling of the titles which Mary holds within the Catholic Church. Doctrinally and liturgically speaking she is a major figure within Catholicism. But there is also an emotional and adoration element within Catholicism that is very evident. A Catholic would not call this practice worship. No good Catholic would say that they worship Mary. She is venerated. This means that she is loved, adored, treasured, held in high esteem, etc. but it does not mean that she is given a place of equal devotion as the Holy Trinity.

But why is she so important? One of the best explanations I have heard is from Peter Kreeft. According to Kreeft, “We love Mary for one reason: because we love Jesus.” He goes on to explain that Jesus comes to us through Mary. “She is the place where the single most important and miraculous and wonderful thing that ever happened, happened.” And this all happened because, according to Luke 1:38, Mary said “yes” to God. So again, Kreeft says, “The great­est thing that ever happened, happened in her and because of her.” If we love Jesus, then why would we not revere the means by which He came to us?

Kreeft is attempting to help us see Mary as a type of mediator—a means by which we connect to God. Not only is she a mediator but apart from Christ, she is perhaps the pre-eminent mediator. She is, as declared officially in 1964, the Mother of the Church. That title was given by Pope Paul VI in 1964, but was first used by Ambrose in the 4th century. This comes from an understanding of Revelation 12:17 as well as John 19 when Jesus, from the Cross, turned to John and said, “here is your mother.” Some also hold that Mary is the second Eve—the “new woman” who would “become the mother of every beloved disciple, of every person who follows Jesus.”

There is not space here to discuss another particular doctrine—but it is important to understand the Catholic position. Within Catholic belief, in order to keep Jesus free from original sin, Mary is considered to be sinless as well. Her conception was immaculate. This also sets Mary apart as the most righteous of humanity. We will see in a moment how this connects to an argument of directing prayers to Mary.

So how does all this explain why someone might pray to Mary?

Why Do Catholics Pray to Mary?

In order for a Protestant to understand why do Catholics pray to Mary or the saints we have to understand that from a Catholic perspective “when a person is baptized they become part of the mystical body of Christ.” This means when the Bible calls us to pray for one another this includes those who have departed. And when we consider that James 5:16 tells us that “the prayer of a righteous man is powerful and greatly effects” why would we not go to the most righteous saint of them all; namely, our Blessed Mother—the sinless virgin—who will love and care for us and pray for us.

This is a helpful explanation from Denver Catholic:

Here is where the Virgin Mary comes in. She takes a special place among us, who participate in Jesus’ mediation, because God chose to come to us through her and gave her to us as Mother. Her mission consists in always leading us to him: “Do whatever he tells you” (John 2:5). She, like us, mediates under Christ’s mediation. When we say she intercedes for us, we are not saying we forget about God. It simply means we turn to her for prayers, something all Christians do when they ask for prayers from their brothers and sisters.

Prayer to Mary is a way of being drawn towards Jesus. Just as a Protestant might go to a pastor to say, “pray for me” with the assumption that your pastor will point you to Jesus—so also a Catholic will pray to Mary with the confidence that she will direct us to the Lord Jesus. It is an act of intercession.

A Catholic would say that they are praying to Mary, but they mean something different than a Protestant does when they are talking about praying to God (Though official Catholic doctrine would likely not use this language—the average Catholic often does). From a Catholic perspective, Christ is the Mediator between God and humanity. As Vatican II proclaimed, “The maternal role of Mary toward people in no way obscures or diminishes the unique mediation of Christ, but rather shows its power: it is mediation in Christ.” They would consider a “Hail Mary” a type of prayer request.

Along with asking why do Catholics pray to Mary, you may also be wondering, how long have Catholics been “praying to Mary”? That is a difficult question historically. Some beliefs about Mary which are held strongly by Catholics today are relatively newer in history. As Pope John Paul II said, “many centuries were necessary to arrive at the explicit definition of the revealed truths concerning Mary.” There are elements of this practice, then, which might be fairly modern. But some type of veneration and even intercessory type prayers to Mary are fairly early within the church. The earliest recorded prayer is the Sub tuum praesidium (Beneath Thy Protection).

But is this biblical? 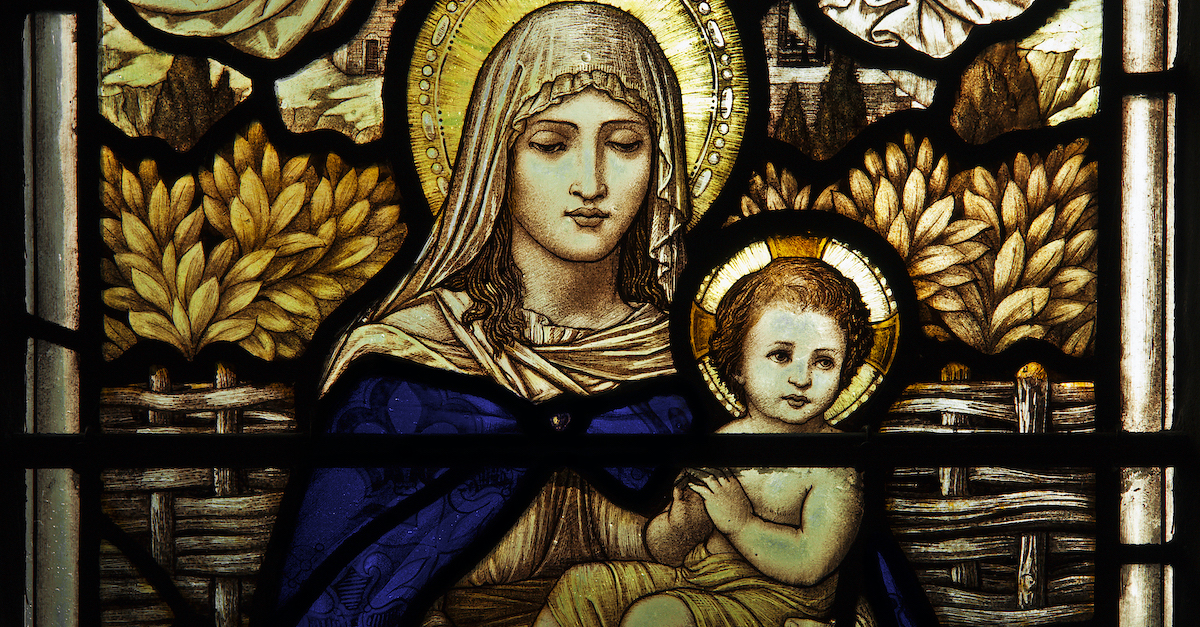 Is it Biblical to Pray to Mary?

I am not concerned here with discussing the Immaculate Conception or any of the titles given to Mary. Rather than trying to decide whether or not Mary is the Beloved Mother of the Church, it might be helpful to ask a more fundamental question. Does Scripture argue that there is a scale to the effectiveness of prayers? In other words, do we find that a prayer has more likelihood of being heard or answered because it comes from someone who is “holier” than another person? Do the Scriptures teach that the prayers of Mary, the mother of Jesus, are heard more than a believing widow named Mary who lives in Podunk, USA?

The Scriptures teach that when we are united to Christ, we have access to the throne of grace (Hebrews 4:16). There is no mention or reference to lines to His throne, nor those who have more access than another. Christ has access. We are in Christ. We have access. It’s as simple as this. Yes, our prayers can be hindered (1 Peter 3:7). Yes, a relationship with Christ is required to have this type of access. But there is no indication in Scripture that God hears St. Peter more than he hears another child of God. In fact, it’s quite the opposite. There is a flattening that takes place before the cross of Christ. Luke 11:27, I believe points to this.

In fact, I think Paul’s argument in Philippians would directly contradict this idea. As Paul writes to the Philippians, he is trying to decide whether or not it would be better for him to “depart and be with Christ” or to continue laboring among them. I am convinced that Paul is “thinking out loud” for the benefit of the Philippians. He wants them to know that even though it is better for him to depart and be with Christ he is choosing to forego personal gain so that others can benefit. But what happens to Paul’s argument if he would still be interceding and even in a better position upon his death? It would undercut his argument. Paul is saying “labor here” and “glory there.”

Asking others to pray for us is certainly a biblical concept, but there is no picture given to us of asking the dead for assistance. In fact, when we do see things like this in Scripture it is often associated with witchcraft and sorcery. Consider how Samuel responded when he was summoned by Saul (1 Samuel 28:7-19).

I’ll admit that a Catholic argument for praying to Mary (or having her intercede for us) sounds logically consistent and is a rather tight argument—if you assume certain things to be true. But on further inspection, there is no biblical precedent for praying to Mary. I do believe there can be a tendency in Protestants to overreact and to almost ignore Mary. This is not healthy. But I’m also not convinced that praying to Mary (or asking her intercession) or to other saints is a healthy spiritual practice. Yes, they could be a means of pointing to Christ. But if too much attention is given to the finger instead of what it’s pointing to, then we are going to find ourselves in an unhealthy spiritual position. If it is true that Mary and the saints are pointing to Christ—why not simply follow the finger and settle our time, attention, affection, words, and prayers upon the one Mediator who gave his life as a ransom?

Mike Leake is husband to Nikki and father to Isaiah and Hannah. He is also the lead pastor at Calvary of Neosho, MO. Mike is the author of Torn to Heal and his writing home is http://mikeleake.net

This content first appeared on Crosswalk.com and is used here with permission. To view the original visit: https://www.crosswalk.com/faith/prayer/why-do-catholics-pray-to-mary.html

Shaped by the Savior - The Crosswalk Devotional - May 18